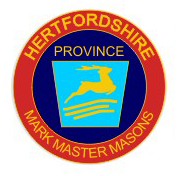 I have already had the opportunity to thank our Distinguished Visitors for their attendance here today, and I trust that they will not object if I now address a few comments to the brethren of Happy Hertfordshire.

Firstly brethren I welcome you all to this our Annual meeting, I hope that you have enjoyed the day so far and will equally enjoy the following dinner. I can hardly believe that it was almost a year ago that we last met here when I was installed as your PGM. In the intervening period I have tried to visit as many of our 68 Mark and Royal Ark Mariner Lodges as possible but there are still some that have not as yet been crossed off my list â I will of course do my best to visit them during the early part of the new Masonic season. To all the Lodges I have visited and to all the brethren I have met â I have been overwhelmed by your hospitality and support over the past year and I thank you for that. Likewise my sincere thanks to all those Provincial Officers who accompanied me on visits or conducted their own during that time.

This afternoon, once again, I have had the pleasure of investing brethren with Provincial Grand Rank. For some of the recipients this will have been a re-appointment to an active office in which they are already conversant, for others it is a first appointment to an active or past rank, and for the rest it is a promotion. Whichever category you fall into brethren I congratulate you on the honour you have just received and remind you that it is not only as a result of your already proven commitment to the Province but also an earnest of what is expected of you going forward. I urge each of you to get out, be seen around the Province, enjoy your office and prove to the Honours Committee that its decision in your preferment was not misplaced.

Today we have seen some of our officers stand down after many years of sterling service to the Province. Heading the list of course is V.W.Bro Trevor Clarke whose first appointment in Hertfordshire Mark was to active ProvGSO in 2009 before becoming ProvDepGSec in 2010 and then ProvGSec, taking over from me, in 2011. After eight years in that post Trevor has decided to hang up his Provincial pens in saltire and retire â although knowing of his substantial involvement in many other Orders I cannot see that lasting for long.

ProvGDC will you please escort V.W.Bro Trevor to the East. (Pause).

Trevor you have helped the members of the Executive, the vast majority of our Lodge Secretaries and Scribes and indeed so many of the brethren who have come to you for advice since your appointment as ProvGSec that it would be totally inappropriate for me to allow you to escape without marking the great service you, and indeed your wife Jeanette, have given over many years. As a small memento we have for you – a couple of items loosely associated with ProvGSecs (and there will be something for Jeanette coming along later).

I know that you plan to address the Brethren before we close this meeting so I wonât pressurise you to say anything now â unless you really feel the need to do so of course.

Others standing down today include W.Bro Prof Jordan Giddings after three years as APGM, W.Bro Ken Gooding who was appointed ProvDepGSec in 2011 and has remained with the Provincial Secretariat since then and one of the âbackroom boysâ W.Bro Geoff Parrish who, although not holding a collared office, has been acting as the Provincial Social Secretary for more years than I care to remember. Our thanks to them all for their valued contribution over the period for which they served.

Talking of social events, this last weekend a smaller-than-usual party of us went down to Brighton to attend the MBF Festival hosted by the Province of Sussex where R.W. Bro Martin Wilson and his team managed to raise a total of just over Â£1.35 m â an excellent result. The reason our party was smaller than usual was that Saturday, the day of the MBF festival, coincided with this Provinceâs Craft Festival dinner at the Guildhall. Hopefully next year we will have a stronger presence at the MBF Festival to be held on the 13th of June at the Kent showground at Detling near Maidstone and I will be asking our incoming Social Secretariat i.e. W.Bros Graham Long and Brian Meager to publicise the event and assist in our attending the same. What better way to start than by introducing you to the Festival President. ProvGDC would you please escort R.W.Bro Archie Torrence, PGM of the Province of Kent, to the pedestal.

R.W.Bro Archie, please accept this as a contribution from the Mark brethren of Hertfordshire. We look forward to being with you next year.

Last month, at the investiture meeting of Grand Lodge, the Grand Master appointed the following brethren to active Grand Rank: V.W.Bro Brian Tierney to GJW (making him a R.W.Bro) and W.Bro Trevor Clarke to GJO (making him a V.W.Bro). Receiving their first appointments to Past Grand Rank on the same day were W.Bros Pins Poullais and Roger Southcombe both of whom were appointed to PGStB and W.Bro Warren Singer who was appointed to PAGStB.

At the September meeting of Grand Lodge the following are due to receive promotion: W.Bro Roy Moth to PGJO making him a V.W. Bro and W.Bros Michael Gerschel, Jon Lydon and Ken Gooding to PGJDs and we congratulate them all with respect to their respective preferments.

In his written report our retiring ProvGSec has thoroughly reviewed the Provinceâs social and ceremonial events of the last year and I have no intention of repeating any of that data however I would wish to comment on the development of the Provincial Grand Masterâs Lodge of Instruction over the last twelve months. I am indebted to the DepPGM and the ProvGDC for leading the team which has expanded the activities of the PGMâs LOI into much more than a Lodge of Instruction â as can be seen from the âadvertisementâ placed inside the front cover of the Paper of Business. I have seen the benefits of the LOI itself which has resulted not only in an increased standard of ritual from the participants but also a newly-found level of confidence in some who previously would never willingly have volunteered to perform the simplest ritual task. I am pleased to be able to report that many of our younger and keen brethren are regular attenders at these LOIs which also provide an additional social contact on a routine basis.

Currently the PGMâs LOIs are held monthly at the St. Albans, Cheshunt and Watford centres â the dates of which are published on the excellent website managed by Bro Roger Outram where there is also a wealth of supplementary information of benefit to all.

Lastly you may note from the âadvertisementâ to which I referred earlier that we now have a âLodge Support Groupâ comprising members of the PGMâs LOI, the King Harold DCsâ Lodge, the Latimer Lodges and the Mark Stewards Lodge. It is there to aid Lodges in need of assistance by supporting them with brethren to take part in ceremonies or, where the Lodge may have no work to do, by providing a presentation to attract members and guests to what would otherwise turn out to be a dull meeting â thereby ensuring that blank agendas are a thing of the past.

I will finish by thanking both the Secretariat, under the direction of V.W.Bro Trevor Clarke, and the DCâs team, headed by our ProvGDC W.Bro Roy Moth, for all the hard work that they have put in to ensure that todayâs event has gone so smoothly. My thanks, and that of the Executive, is extended to all who have, in any way, given of their time freely and contributed to the success of this meeting.

As our Masonic season is coming to an end we look forward, with your help, to a productive and enjoyable 2019/20. Enjoy the summer break.

Finally brethren. May the Great Overseer of the Universe bless and preserve you all and remember, âamong Mark Master Masons you will ever find friendsâ.