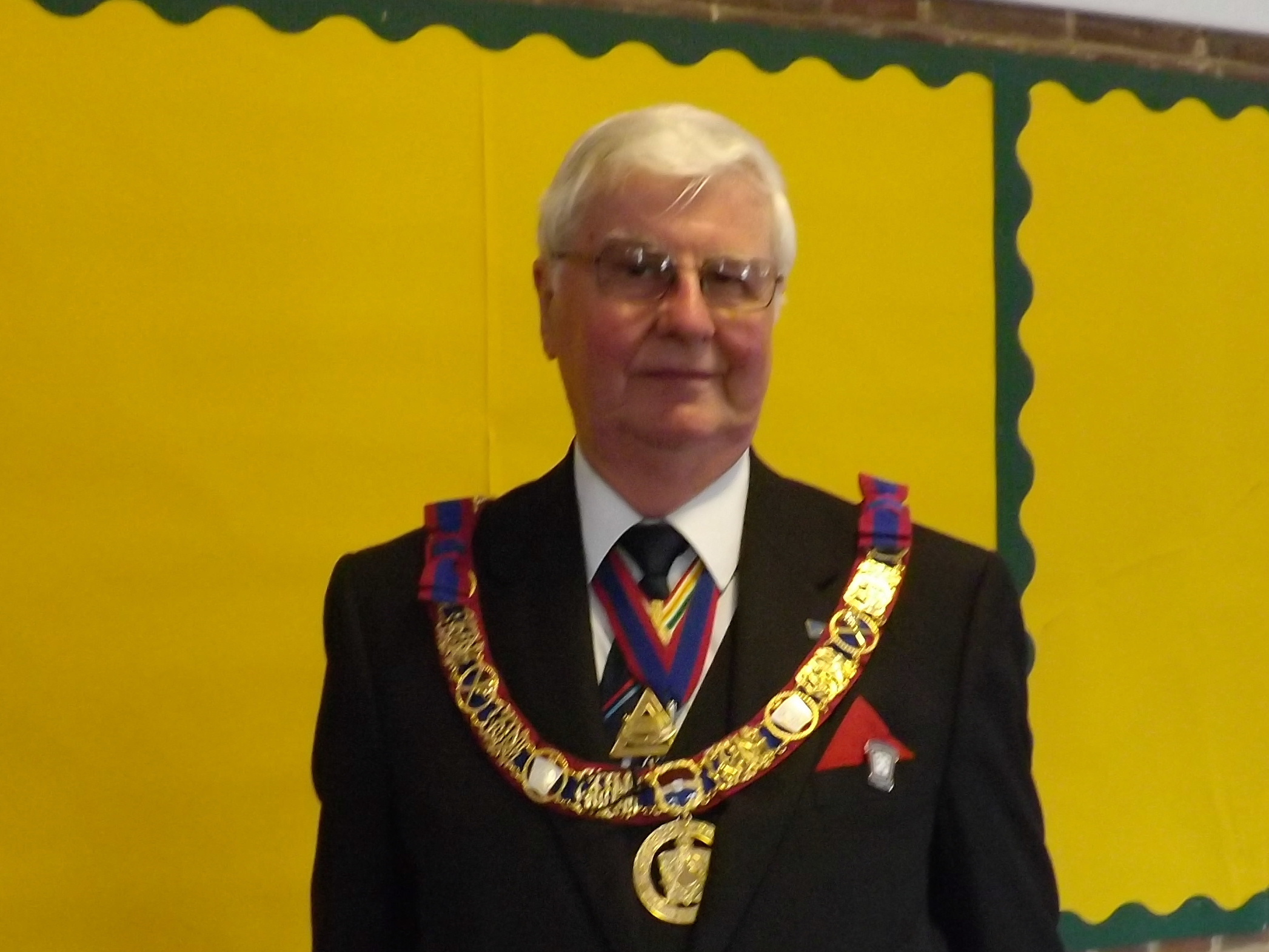 TUESDAY 17th July
The day we had all been waiting for. Well it was here, I had a phone call the night before and have been asked to fill the post of Grand Inner Guard I immediately said yes and so the scene was set, I arrived at 0830 am to find the place buzzing I made myself known to the GDC and then we had full rehearsal of the ceremony, after many attempts the job was done and we could relax.
Provincial Grand Lodge was opened by R.W. Bro Keith Emerson PDGM. With the help of R.W.Bro John Oakley- Smith JP.
Grand Lodge Officers were then admitted in procession and a rousing round of applause greeted R.W. John Prizeman Deputy Grand Master who was greeted by the acting Master and accepted the gavel, Grand Officers were shown to their places and the scene was set. The Provincial Grand Master Designate R.W.Bro Richard Walker entered accompanied by The Masters of the Lodges closest to him was invested and was formerly put into the Chair by the DGM R.W. Bro John Prizeman.
Next it was the Deputy; W. Bro Maurice Smith who entered was entrusted by R.W. Bro Richard Walker and took his place.
Then came the Assistant W.Bro Jordan Giddings who entered was entrusted and took his place in the Lodge.
The Provincial Grand Master then went on to thank all the Brethren of Hertfordshire for attending and all the R.W. Brethren who had come from all points of the compass to be here today. The Provincial Grand Lodge was then called off for lunch.
We all had a good lunch at which we had a couple of Speeches one to our new PGM Richard Walker by John Prizeman Deputy Grand Master and in reply Richard presented John with a book and bottle. Then it was back to the temple. At 3.30 precisely proceedings were called on and after reports from the Treasurer, Secretary, Almoner and Charity Steward. It was back to the Investiture of Officers of the year, It was a tense time and the team were well rehearsed. Below are the Brethren who received honours on the day and congratulations to all of them. Proceeding on the P.G.M then went on to announce that the Silver Token would be, he then a long list of Lodges and achievements and finished by announcing the name of Dennis Brown of James Parsons Lodge no 974, he was escorted to the pedestal and received the Token and received a hearty round of applause. The P.G.M. then went on to say that he had one more to present and after a long list of Lodges and achievements announced the name of Derek Watson of Hertford Lodge no366, he was escorted to the pedestal and received his token and received a hearty round of applause.
The PGM then addressed the assembly, thanking the Right Worshipful brethren and a present for attending what had been a great day (full speech printed below) in all some 316 attended, this had been a great day everything was planned and practiced over and over and our thanks go Roy Moth DC, Trevor Clarke PGSec for their hard work. We must not forget the Team from Grand Lodge for their work it was perfect and added to the day the Grand DC R.W Bro Frank Spencer and his assistant DCâs Mathew Hampson and Mark Golding and the rest of the team from Grand Lodge were absolutely spot on. The team who cleared up started at 5.05 pm and finished at 6.00 pm they deserve our thanks. Thank you to them for working so hard.

Brethren All,
We now come to that part of the afternoon where it is traditional for the PGM to address the assembled brethren. Over the last ten years I have been privileged to attend many Provincial Grand Lodge meetings around the country and have heard many such addresses, lasting from under 5 minutes to well in excess of 25 minutes. It used to be the practice for the Distinguished Visitors to run a sweepstake with the winner being he who guessed nearest to the time taken for any such address. In case there is a sweepstake being run this afternoon I will give no indication as to how long I shall take, but if you are wearing an old-fashioned mechanical timepiece now might be the appropriate time to wind it â just in case.
Earlier today I had the opportunity to thank our Distinguished Visitors for their attendance and whilst it is always rewarding to see so many brethren from other Provinces at our meetings, as it gives us the chance to repay the hospitality extended to us by their respective Provinces, it is important to remember that for the brethren of Hertfordshire this is your meeting and I welcome you all to it â especially those of you who have not attended a Provincial Meeting before.
I offer my sincere congratulations to all those whom I have had the pleasure this afternoon of investing with Provincial Grand Rank, whether that be to an active officer of the year, a promotion or a first appointment. For each of you, your past services have been considered and approved by the Honours Committee on the understanding that you will continue with your good work and that you will return to your respective Lodges eager to impress on the members the wise choice made in each of your appointments.
For those of you appointed to an active role, there will be ample opportunity for you to join the Provincial team on visits to our Lodges, both Mark and Royal Ark Mariner, throughout the Province where you will always find a warm welcome. It will also give you a chance to get to know some of those Masonic centres where you may never before have set foot. I would also strongly encourage you, if you are not already, to become regular members of one of our PGMâs Lodges of Instruction as, not only by your attendance may you influence others to join, but you will no doubt find the experience enjoyable and beneficial – as you are likely to be called upon to participate in our annual demonstrations of the ceremonies of advancement and elevation which are always conducted by the active officers of the year.